Charges 2 and 3: Evolution and Popularization 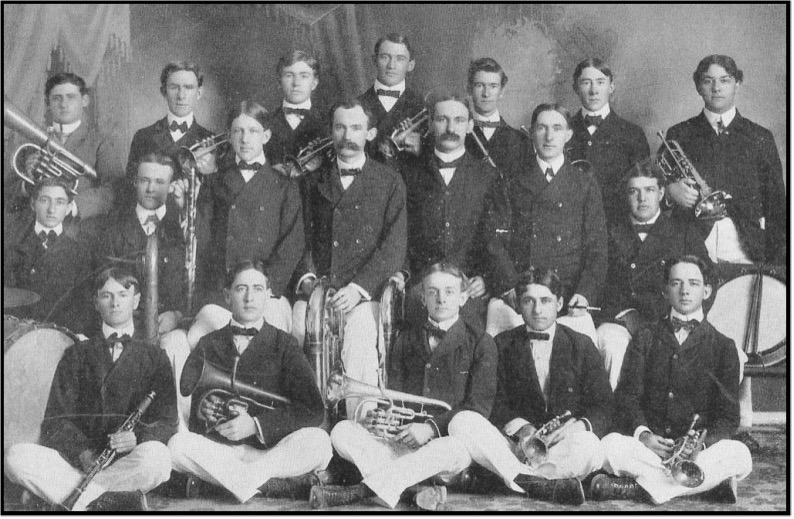 After its debut, the song began to inhabit the campus almost immediately. The 16-member University Band learned “The Eyes” within a week.

In 1905, it was heard as the University of Texas was losing its football game to Texas A&M. Students began to sing the song, and soon the stadium was filled with the music and the team was inspired to come back and win the game — with A&M not scoring the rest of the game. It was heard at the end-of-the-year banquets for the popular student literary societies and sung at law student gatherings. 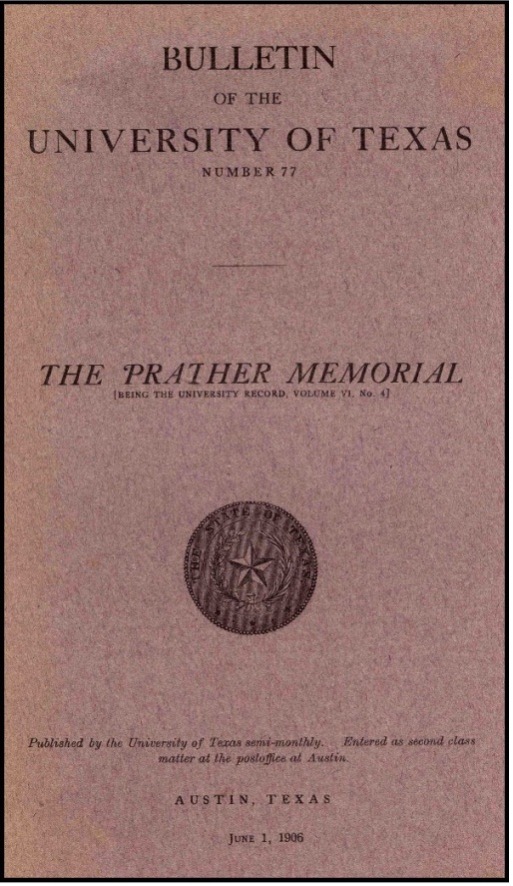 That same year, President Prather died in office. “Although a delicate subject to be mentioned to his bereaved family,” Lewis Johnson later recalled, “close friends ventured to ask if the [“The Eyes”] might be used in the memorial service . . . The family thought it appropriate, reverential and considerate, knowing, as they did, how near to [Prather’s] heart its sentiments were. With bowed heads it was rendered,” Johnson continued. The UT Glee Club performed “The Eyes,” but it wasn’t the same kind of song that was first heard in 1903. To those present, the music “lost its character as a taunting jest” and became a “reverential hymn.” Prather’s message, that Texas looked to the university for its future, was taken to heart. This marks the first time the song was used on a solemn occasion and began to demonstrate the range of emotion the theme could express.

In the months after Prather’s memorial service, “The Eyes” rooted itself more deeply into the customs and rituals of campus life, and over the next decade, became an integral part of the identity of the university. As early as 1916, it was a part of the Spring Commencement ceremony.

October 7, 1916: The UT vs. Rice Institutefootball game at Clark Field in Austin.

That same year, just after the kick-off of the UT vs. Rice game, “The Eyes” was heard for the first time sung by both men and women. This was the first time women had any voice in a stadium. As reported by the Alcalde alumni magazine, the ladies, “true to their traditions . . . refrained from cheering, but when the ‘eds’ (men) rose to the ‘Eyes of Texas’ the co-eds (women) couldn’t sit still and for the first time in University football their well-modulated sopranos joined in with the coarser strains across the gridiron. It was new, and it was fine. And now the women are wondering why they haven’t been doing it all the time.” 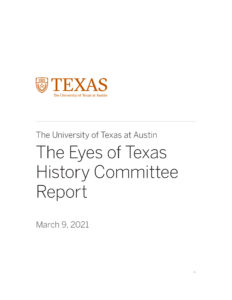 In Politics and as Protest at UT

In 1911, President Sidney Mezes invited the entire Legislature to campus for a barbecue. Members were greeted by the University Band and more than 1,000 male students who stood shoulder-to-shoulder on either side of the West Walk (later, “West Mall”) with cheers and welcoming handshakes for the visitors. At the top of the hill, the legislators were greeted at the old Main Building by more than 600 women students, who pinned flowers on their lapels and serenaded them with “The Eyes.” The message was subtle but clear: the eyes of the people of Texas were looking to the lawmakers to do what was right and properly fund the state university.

With a banner that read “University’s Future Threatened,” UT students prepared to march on the Texas Capitol.

In 1917, “The Eyes” was used in a new way: as a protest song. After years of strife between Gov. James “Pa” Ferguson and the university administration, in part over the governor’s desire to hire and fire faculty at will, Ferguson called the Board of Regents to his office. Students organized a march on the Capitol. It was the first protest demonstration in UT’s history. Led by the University Band, students paraded from campus to the Capitol, through the rotunda, and then circled the Capitol grounds. All the while, the governor and regents watched from Ferguson’s office window. “The parade was thoroughly orderly,” reported the Alcalde. “The governor was especially tantalized and his wrath was likely materially augmented by various particularly beautiful young co-eds, who, as they passed singing ‘The Eyes of Texas are Upon You,’ smiled sweetly at the governor, and nodded their heads, as if to say, ‘You naughty boy.’” 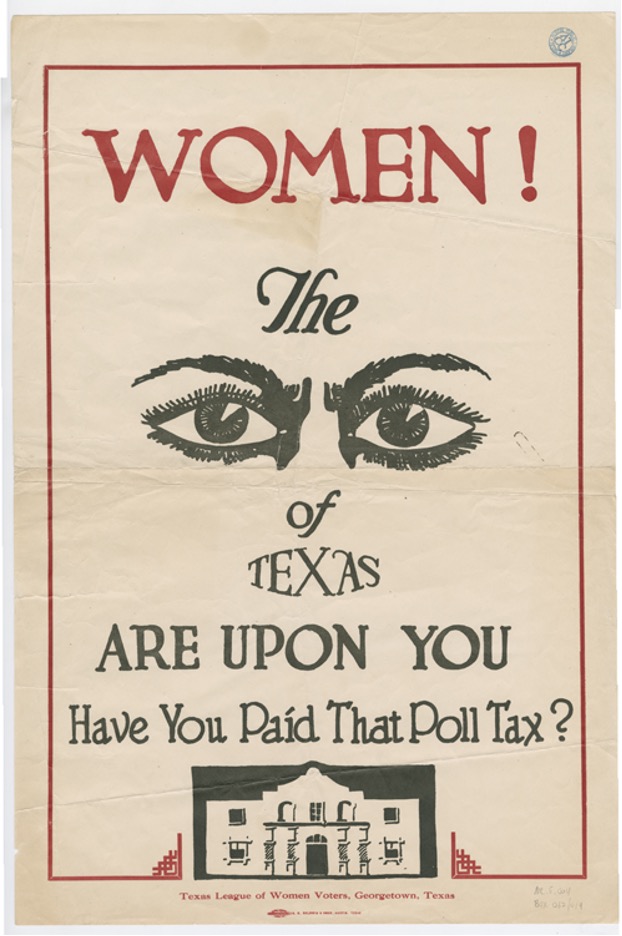 Poster by Texas League of Women Voters of Georgetown, Texas, around 1920.

The phrase “the eyes of Texas are upon you” moved beyond the campus, potentially spread by former UT students in other contexts, including political, such as when the Texas League of Women Voters produced poster circa 1920 reading, “The [drawing of eyes] of Texas are Upon You.”

In 1944, students again marched on the Capitol singing the song, this time in support of embattled President Homer Rainey. He was accused of hiring a conscientious objector, as well as an allegedly gay professor, and it was further alleged that he wanted to admit African-Americans to the university. When he was fired, a mass of students marched to the Capitol demanding that Rainey be reinstated and singing “The Eyes of Texas” in the rotunda. The following day nearly all the enrolled students held another protest march as a funeral parade for the death of academic freedom, and “The Eyes of Texas” was played as a dirge.

“The Eyes” was heard at a 1975 march protesting the selection of Lorene Rogers as UT’s president over the recommendation of a selection committee. 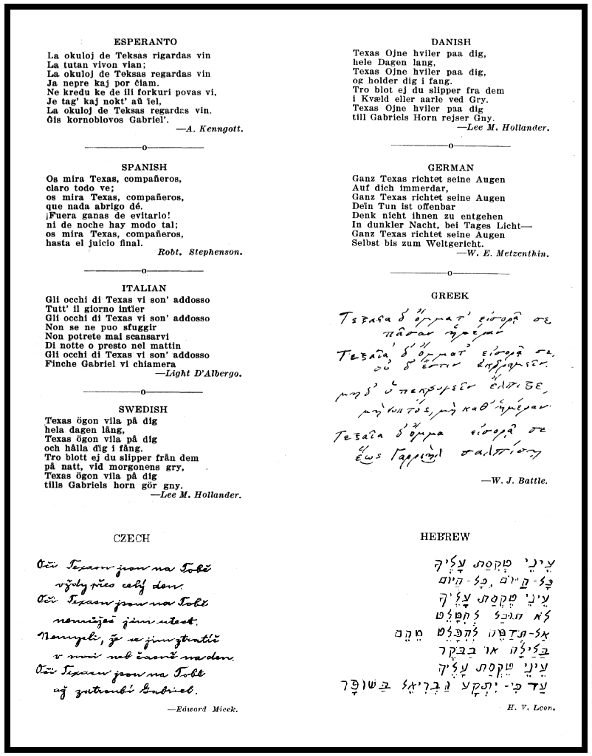 In 1930, University Harry Benedict asked faculty members to translate “The Eyes” into several languages, including Esperanto. The results were published in the Alcalde alumni magazine, and in the 1932 Cactus yearbook.

By the 1920s, “The Eyes” was everywhere, fully integrated into campus life and popular throughout the state. In 1918, during World War I, the university published a Community Song Book of both Texas and patriotic tunes, which was widely used by elementary schools for singalongs. “The Eyes” was on the first page.

On campus, touring orchestras playing Saturday night dances performed “The Eyes” as the last song of the evening. At football games, the song was elevated to a pre-game tradition. Longhorn fans rose, doffed their hats, and reverently sang “The Eyes” before kick-off. Another important game tradition was also birthed with the student “snake dance” and post game celebration where fans supported the players after the game “and portray true Texas spirit here, because this is done whether we win or lose.” This tradition continues today with the singing of “The Eyes of Texas.”

In 1930, President Harry Benedict asked faculty members to translate “The Eyes” into numerous languages, including Esperanto.

Now the song’s popularity propelled it beyond the campus. Schoolchildren across Texas performed it at assemblies and class singalongs. It was heard at birthday parties and weddings and county fairs. Two nationally popular dance bands recorded jazz-swing renditions of the song, and radio star Bill Boyd and his Cowboy Ramblers produced a western-swing version.

In 1925, a state senator tried to have “The Eyes” declared the state song, saying it was emblematic of the history of the state and was well-known to the public – especially schoolchildren. Clearly, the idea that “The Eyes” represented Texas broadly had gained traction at this time: when Southern Methodist University visited West Point in 1928, their band played the song. Ultimately, “Texas, Our Texas” became the official state song in 1929, but in 1963, another unsuccessful attempt was made to make “The Eyes” the state song. 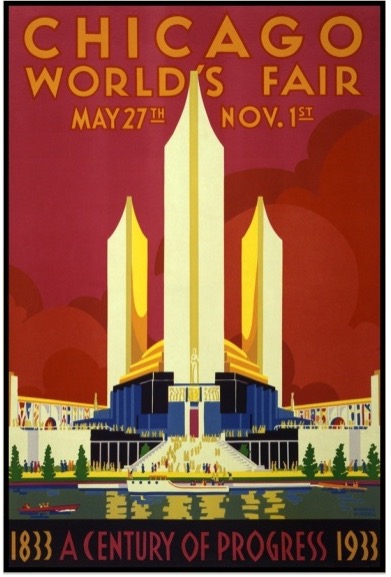 Poster from the 1933 Chicago World’s Fair.

At the 1933 World’s Fair in Chicago, visitors to the Texas Exhibit stepped onto a faux balcony to gaze out toward an image of the Texas Capitol with the phrase “The Eyes of Texas are Upon You” above it. 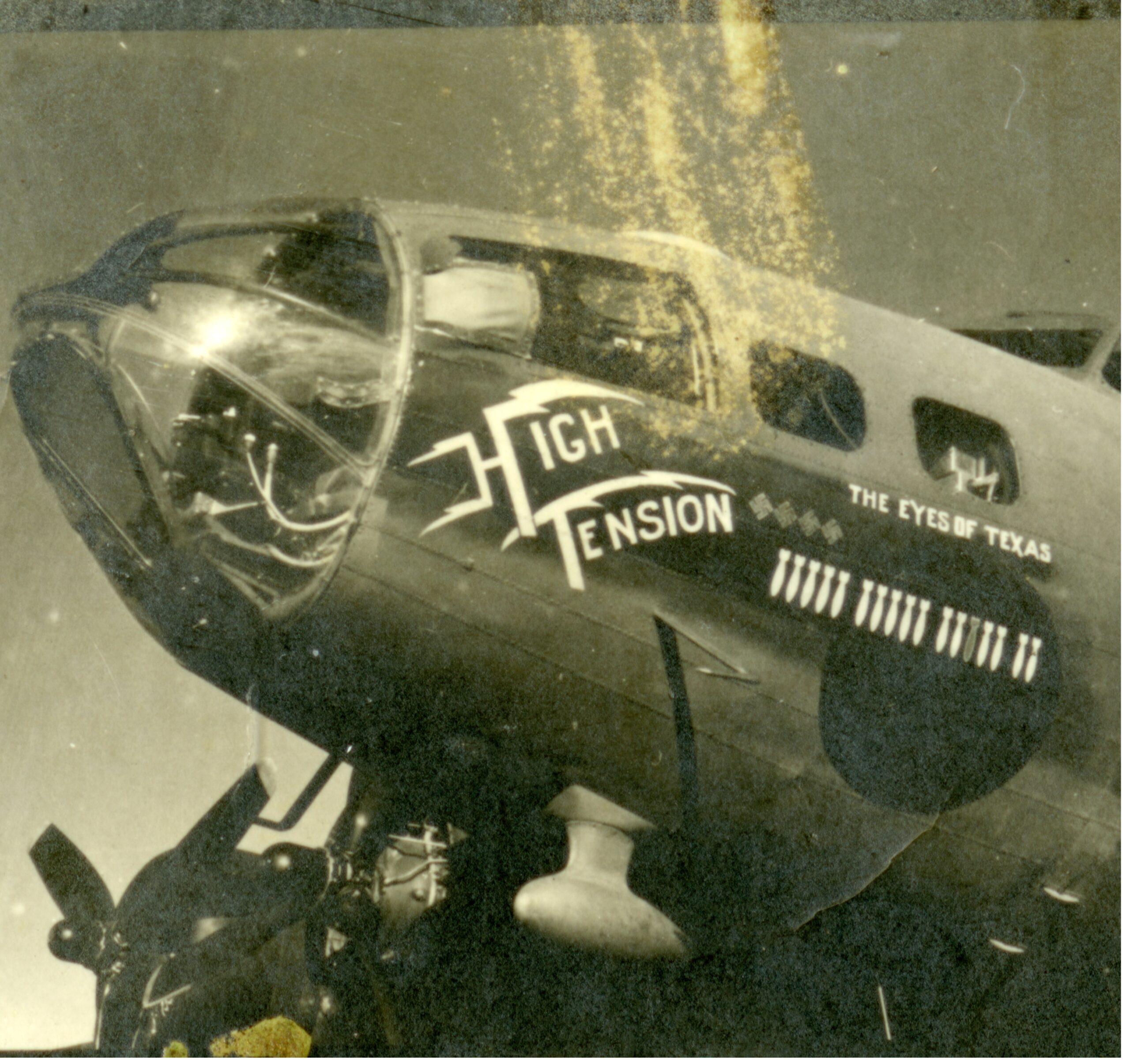 The B-17 Flying Fortress “High Tension,” also known as “The Eyes of Texas.” The phrase can be seen below the window in the upper center of the photo.

From World War II to the present, “The Eyes of Texas” has served as a connection for both alumni and all Texans stationed abroad. “The Eyes of Texas” was part of an inspirational story — a wounded Texas soldier who was unable to move from the battlefield when a New Yorker sang the first line of the song to give him the strength to move to safety. A B-17 bomber was named “The Eyes of Texas.” A 1944 barbecue in Hawaii attracted 8,000 Texans and friends, and the Army and Navy bands together played the song to welcome Fredericksburg native Admiral Chester Nimitz, who remarked, “The eyes of Texas are upon you.” Wartime Hollywood latched onto the song: Thirty Seconds over Tokyo featured a group of Texas sailors singing “The Eyes” before battle. Flying Leathernecks and Go for Broke! also included the song, but it was always to connect characters to Texas, not the university.

Hollywood continued to use “The Eyes” to tie characters and places to Texas: Elvis Presley in Viva Las Vegas (1961), Blake Edwards’ What Did You Do in the War, Daddy? (1966), Roy Orbison and Hank Williams performing it in Roadie (1980), and The Right Stuff (1983).

When Mexican American farmworkers and clergy in 1966 protested low wages and poor living conditions by walking 400 miles from Weslaco to the Capitol in Austin, “The Eyes of Texas” was their marching song.

Off campus, and off planet Earth, NASA used “The Eyes” as a wake-up alarm for astronauts during its Gemini, Apollo and Skylab missions, while in 1969, UT graduate Alan Bean took the song, printed on a piece of lightweight silk, to the moon and back aboard Apollo 12. 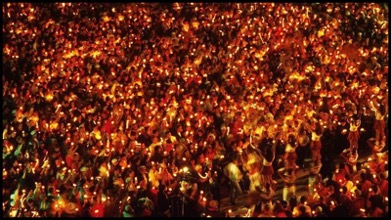 Thousands of Longhorn fans gather on the Main Mall for the Texas Hex Rally.

In 1999, after the Texas A&M Aggie Bonfire stack collapsed killing 11 students and one former student, Longhorns converted the traditional Hex Rally into a memorial service, invited the Aggies to Austin, and mourners from A&M and UT gathered at the Tower, where “The Eyes of Texas” and “The Aggie War Hymn” both were sung.

Those who attended the university’s 2000 Spring Commencement witnessed a very special event. Barbara Smith Conrad (1937-2017), world renowned operatic mezzo-soprano, led the graduates in “The Eyes of Texas.” Aside from the amazing performance, Conrad’s presence and journey to the event was significant.

As one of the first Black undergraduate students admitted in 1956,  a group  now known as The Precursors, Conrad was encouraged to audition for the leading role in the school production of “Dido and Aeneas,” which she got. But when the lead male role went to a White student, a state legislator objected to the mixed-race couple and pressured the administration to rescind the role, which it did, a move that made national news. Conrad persevered, got her degree, became a renowned opera singer, and was given the Distinguished Alumna Award in 1985. Her moving 2000 performance, a show of grace toward the university that had wronged her, must be one of the most definitive versions of “The Eyes of Texas.” Her courage and spirit of forgiveness provide the model and validation of the song’s ability for truth, healing and reconciliation. 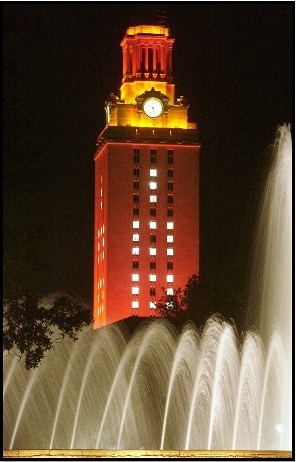 The Eyes Turn 100: Centennial Recognition. UT Tower lit in orange with 100 in the windows.

In 2003, the Texas Exes UT Heritage Society celebrated “The Eyes of Texas” centennial. An exhibit on the history of the song was installed on the ground floor of the Main Building. The Alcalde magazine published a long-form feature story recapping the song’s history, and the Board of Regents approved a resolution that reaffirmed “The Eyes of Texas” as the official song of the university.

On May 12, a birthday party was hosted at the Alumni Center, complete with cake and ice cream. Austin musician Patricia Vonne was a special guest and concluded her performance with a Spanish version of the song. Four members of the UT Men’s Chorus treated the audience to complete original and parody versions of “The Eyes of Texas.” That night, for the first time in the university’s history, the Tower glowed orange with a “100” in the windows.